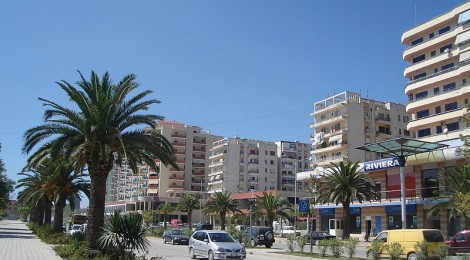 Vlore (Albanian: Vlorë or Vlora) is a city of 93,812 inhabitants in Albania, the country’s second port after Durres. Located in southwestern Albania, on the shores of the Adriatic Sea, in the District of Vlora. The port of Vlore, which overlooks the Strait of Otranto, is the most efficient Albanian port, and the closest to Italy: it’s only 70 nautical miles far from Punta Palasca on the coast of Salento.

It is protected from the island of Saseno (Sazan) and Cape Tongue (Kepi i Gjuhezes), the northernmost point of the Mountains Acroceraunians (Karaburun).

Click on the thumbnail for a full screen visualization.

Center of shopping and major port of Albania, Vlore has developed a great fishing industry. The area provides reserves of oil, natural gas, bitumen and salt. The city of Vlore also hosts some important settlements of Albanian Army. In agriculture the city of Vlora has assumed a significant role, with olive and fruit on a large scale. There has also the cultivation of oats, corn and cotton and livestock, especially goats. This is the most important food industry, oil production, tanneries and refineries in Albania. Recently experienced a strong boost tourism, promoted by the beauty of the coastal landscape of the bay of Vlora, which makes it one of the most popular tourist destinations in Albania.

Things to visit in Vlora

The “monumental” avenue and “Justin Godard”
It is a building complex which houses important historical and architectural values of Albania.The works for opening of this road started from the late seventeenth century. The path consists of buildings of the eighteenth and nineteenth centuries, typical of “valonian” architecture, built in white stone facades, built on two or three floors, with rectangular windows framed, with blinds of different colors and a sloping roof made of tiles of “spanish” type. The ground floor in many cases is used as shop in Vlora and throughout Albania, while the upper floors were used to house the families of holders of traders.

The Mosque of Murad.
It is built in sultan style, with the dome built in the mid-sixteenth century. It consists of the prayer hall and minaret built in carved stone. This monument is different from the others for the harmonious distribution of windows, high technology building and decorative effects of the wall, with alternating stone and brick. The design and construction of the mosque were built by the architect Sinani, of Albanian origin, who was one of the most important builders of mosques in Albania in the first period of the Ottoman Empire. He built more than three-hundred buildings in Albania. In addition to mosques, he created palaces, tombs, aqueducts and fountains. As chief architect of the Empire was responsible for the construction of mosques, and the transformation of Byzantine churches into mosques not only in Albania but also in the city of Constantinople, nearly one hundred years from Turkish conquer. In his work he was systematically inspired by the Cathedral of St. Sophia. His the most important work remains the Suliman mosque in Istanbul.

The tomb of Ismail Qemali.
It is the burial place of the first Prime Minister of Albania. Situated in the garden at the center of Vlore. It ‘was built in 1932 by Odis Paskal.

The monument to independence.
It is dedicated to the people’s war for independence and freedom of Albania and is the work of sculptors Kristaq Rama, Shaban Hadera and Muntaz Dhrami. It is a high bronze monument, 17 meters high. It was inaugurated in November 28, 1972.

The theater Petro Marko.
This is a building located on main street in Vlora, with the front painted of a color between pink and orange. This building is a pleasant exception in an architecture which consists of modern houses and parallelepipeds of socialism that prevailed in Albania .

The museums of Vlora.

The Museum of History:
It is located in the city center, opposite the area where you change foreign currencies. The building that houses the museum has two floors, there are preserved many archaeological objects, and historical evidence of the Middle Ages, the Renaissance and the modern-day of Albania.

The Ethnographic Museum:
It was inaugurated November 27, 1982. For its architectural and historical value has been declared a monument of cultural importance for Albania. Ethnographic objects are exposed in the museum, ranging from the sixteenth and nineteenth centuries.There are items worked in metal, wood, stone, but also traditional clothing, costumes and kilims (carpets).

The city of Orikum.
Of ancient origins, now Orikum lost the splendor and nobility of his past. He has known many lords and warlike people, crossing the lands of Albania and its waters: Romans, Macedonians, Turks, Russians came as friends or enemies of the people of Albania, or because the war between them. Perhaps its location was the reason for these “visits” so frequent over time.